A film produced by
The 1906 Centennial Alliance
The Department of the Interior
United States Geological Survey
April 18, 2006

This 46-minute film includes dramatic historical footage, colorful animations, and interviews with earthquake experts. The catastrophe of the great 1906 quake spurred a century of progress in earthquake science and engineering. Current and future research includes drilling through the San Andreas Fault at depth in the SAFOD Experiment. Learn what you can do to reduce the risk to yourself and family.

Shock Waves received recognition as an outstanding documentary at the 2006 Telly Awards and has been nominated for an Emmy.

MDSHS members participated in the filming of a few segments for this film wearing period clothing using antique survey instruments. 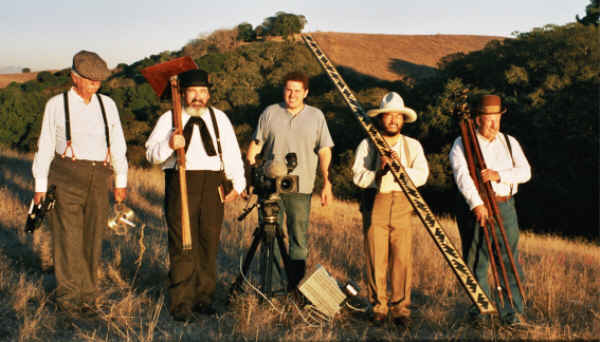 Please scroll down to view additional information about this film event.

How did the Mount Diablo Surveyors Historical Society get involved?

On September 19th, 2005 USGS Video Producer Stephen Wessells reached out to several California Surveyors (Bruce Headquist, Katrina Olsen, Jerry Miller, Dan Gregory and Rand Laforce) in an attempt "...to locate people who in the past have come to the USGS Open House in Menlo Park and played the role of old style surveyors from around 1900?? They had reenactment clothes and old mapping gear. I thought they were affiliated with a group called the Mt. Diablo Surveyors Historical Society. Do you know who these people might be? We're trying to recreate a few scenes of when the post 1906 San Andreas Fault "Lawson Report" surveys took place. Any help appreciated."

Stephen was in luck for Bruce and Katrina were both MDSHS members. Bruce forwarded the email message that very day to MDSHS Chairman Michael Foley. After a few email exchanges, MDSHS agreed to participate in the filming of the segments and arraignments were made to meet. The location of the MDSHS segments were filmed "on the farm" at Leland Stanford Jr. University on October 6, 2005.

Why Surveyors for an Earthquake Study & Report?

Among the most significant observations made after the 1906 earthquake were triangulation surveys -- optical measurements that detect changes in the angles between lines connecting monuments fixed in the ground. By repeating previous triangulation measurements, it was found after 1906 that displacements in the earthquake were largest at the fault and decreased with distance from it, so that a previously straight line crossing the fault had become curved. Maps of triangulation surveys carried out during 1906-1907 documented this earth movement. See Maps #24 & #25 of the Atlas. This information plays a key role in the current models of how much (and when) the San Andreas is expected to slip in the next earthquake. [As an interesting side note, it was determined during the re-survey of the triangles that only two stations, Mount Diablo (established by R.D. Cutts, CS in 1852) and Mocho (established by William Eimbeck, CS. in 1875) remained unmoved during the earthquake of April 18 1906. For this reason the entire 1906/1907 survey was based on stations Mount Diablo and Mocho.]

After the completion of the triangulation surveys, local "damage" or topographic surveys were done to document the effects of the April 18, 1906 earthquake. Information collected included the location and extent of the damage including the direction of the damage. These local surveys could then be combined with the triangulation surveys so that the impact of the quake damage could be examined on a larger scale. This overall examination of the location and extent of the quake's effect was one of the main tools used by the Commission to develop a full understanding of the quake. It was in this activity that surveyors played a major role in that understanding. These local surveys are those depicted by the MDSHS surveyors in the film.

A commission called the State Earthquake Investigation Commission was formed just shortly after the 1906 quake. The study was an exhaustive compilation of detailed reports from more than twenty contributing scientists on the earthquake's damage, the movement on the San Andreas Fault, the seismograph records of the earthquake from around the world, and the underlying geology in northern California. The Commission's final report (published in 1908 (Vol. I, Parts I & II,) and 1910 (Vol. II) and now commonly referred to as the Lawson report because Andrew C. Lawson (1861-1952) was the commission's chairman.) This report consists of two volumes containing over 646 pages of information, charts, diagrams and 148 illustrations (plates) and an accompanying atlas containing 25 maps and 15 images of seismograms. A truly monumental undertaking. To this day, the report remains a document of the highest regard among seismologists, geologists and engineers.

Public Broadcast of the film

There were two showings of the USGS/CBS-5/KPIX-TV, San Francisco, co-production of "Shock Waves", the hour-long TV documentary was broadcast on local San Francisco television stations KPIX on April 12, 2006 and KBHK on April 22, 2006.

In addition to the filming itself the Mount Diablo Surveyors Society (MDSHS) joined the U.S. Geological Survey, Western Region to celebrate their 8th Triennial Open House event on Saturday, June 3 and Sunday, June 4, 2006. The event was held to showcase the scientific research at its Menlo Park Science Center located at 345 Middlefield Road in Menlo Park, California. In addition to special exhibits about the 1906 San Francisco earthquake, there were showings of "Shock Waves" on both days. In addition USGS produced a 46-minute DVD documentary (General Information Product 40) of the film. (Shown below) 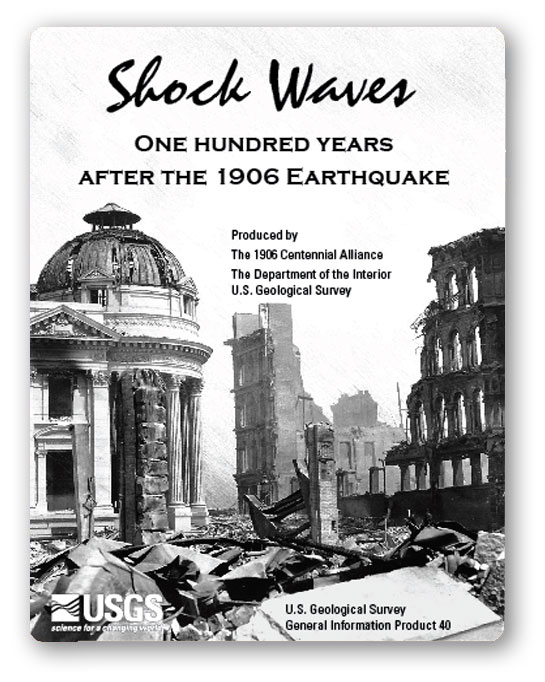 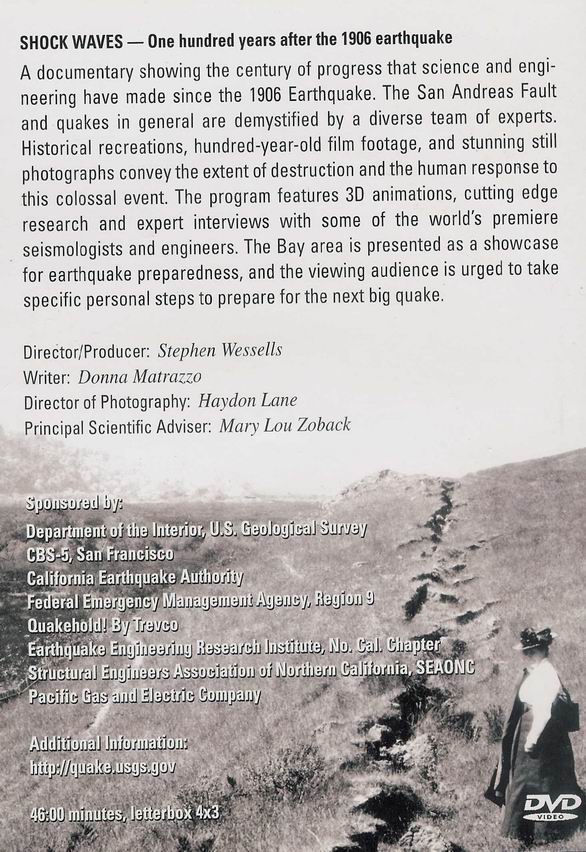 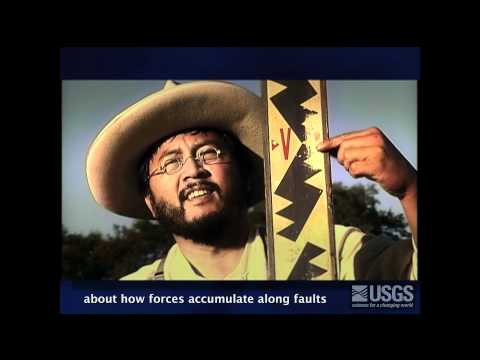 This short excerpt is from a USGS/Bay Area Earthquake Alliance produced television program “Shock Waves: 100 Years After the 1906 Earthquake”. This specific segment describes some of the history behind our modern understanding of the earthquake process. Perhaps one of the most important results that came out of this study was the development of Harry Fielding Reid’s (1859-1944) Theory of Elastic Rebound. He used the information collected from land surveys that allowed him to measure the changes in surface that had been caused by the earthquake. This was something that had been understood in rough form before the earthquake but he developed the first scientific theory about how forces accumulate along faults only to be released in earthquakes. We call this "The Elastic Rebound Theory" and it’s the foundation really of our modern understanding of the earthquake process.

Note: This video has been released into the public domain by the U.S. Geological Survey for use in its entirety. Some videos may contain pieces of copyrighted material. If you wish to use a portion of the video for any purpose, other than for resharing/reposting the video in its entirety, please contact the Video Producer/Videographer listed with this video. Please refer to the USGS Copyright section for how to credit this video.

A Production of: USGS and The Bay Area Earthquake Alliance

One Hundred Years After the 1906 Earthquake

Get Flash Player (free download) to view this movie. This 46-minute film includes dramatic historical footage, colorful animations, and interviews with earthquake experts. The catastrophe of the great 1906 quake spurred a century of progress in earthquake science and engineering. Current and future research includes drilling through the San Andreas Fault at depth in the SAFOD Experiment. Learn what you can do to reduce the risk to yourself and family.

Shock Waves received numerous industry awards including recognition as an outstanding documentary at the 2006 Telly Awards and was nominated for a regional Emmy Award in the Bay. It aired twice on KPIX CBS5 and its affiliate station around the time of the April 18, 2006, 100-year anniversary of the Great San Francisco Earthquake.

Misc. related links (Note, you will be leaving the MDSHS website. Use the "back" button to return. )

Map # 24 - Map of Coast Range regions of Middle California showing distribution of earth movement on April 18, 1906, as revealed by displacement of triangulation stations of the Coast and Geodetic Survey, as determined by resurvey, 1906-1907.

Map #25 - Distribution of the earth movement on April 18, 1906 and in 1868, as revealed by displacement of triangulation stations of the Coast and Geodetic Survey, as determined by resurvey in 1906-1907